According to news agency Reuters, approximately 60% of Brits know how the offside rule works in football.

However, there are some areas of the game that even the most enlightened of football fans struggle to comprehend.

Most football leagues around the world have a straightforward competition in which each team plays each other twice. The team with the most points is eventually crowned champions and everyone knows where they stand.

It is often referred to as the 'European' format and works well for the English Premier League, German Bundesliga, French Ligue 1, Spanish La Liga and many other top leagues. However, not every football league has decided to adopt such a simple approach.

Take Liga MX, Mexico’s top flight, for example, where the system known as 'Apertura and Clausura' is used. This format sees the season divided into two tournaments, in which each team plays each other just once in each half.

At the end of each tournament, the top eight sides advance to a knockout competition, with the eventual winner crowned champion, which results in two champions per season.

While Apertura and Clausura is very popular in Latin America, there are other unusual football league formats which will leave you scratching your head in either disbelief or utter confusion.

The Eerste Divisie is the second tier of the Dutch football league system and it offers one of the most unusual league seasons in football.

All in all, 20 teams enter the season in August with the hopes of securing promotion to the Eredivisie by finishing first in the league table. It may sound familiar, but when the regular season comes to an end in May, things get a whole lot trickier.

The team which finishes in first place are guaranteed automatic promotion to the top flight. However, the teams that fail to clinch the top spot must compete in a knockout tournament for the chance to enter the Eredivisie in the following season.

This would be fairly straightforward, if the tournament was played between the top four teams, like the play-off system used in the lower leagues of English football, for example. But it isn’t.

The top four sides do go through, but they aren’t alone. The tournament sees ten teams compete in total, with the top four joined by teams that are awarded places depending on how they do in particular sections of the seasons, known as "Periodes".

Most often this sees the best eight teams enter the tournament. However, that isn’t always the case. The 2013/14 season, for example, saw Sparta Rotterdam qualify despite finishing in 16th place, just four places off of the bottom.

The final two places are taken up by the bottom two clubs in the Eredivisie, who have the chance to fight to keep their place in the top flight.

The four teams that qualify via the regular season ‘periods’ enter the first round, with two teams qualifying for the second. They then face off against the other six teams, with the four winners entering two finals, which decide who takes the two promotion spots.

The format is fairly straightforward, yet the way in which teams are selected for the promotion tournament is somewhat odd, if not extremely pointless.

While we’ve had enough time to get our heads around the format of MLS, it still offers a level of confusion to those that are unfamiliar with the league, which sits somewhere between the Apertura and Clausura system and the standard, European system that we are used to.

The regular season consists of not one, but two tournaments, known as ‘conferences’ in which 10 sides compete in each. These two conferences are known as ‘Western’ and ‘Eastern’, which splits teams based on their geographical location.

This ‘regular season’ runs between March and October, before the two tables are combined to determine the winner of the ‘Supporters’ Shield’, which is awarded to the team with the highest point total.

Although, the Supporters’ Shield isn’t the main prize. The one that every team wants to get their hands on is the MLS Cup, which is competed for once the regular season comes to an end. 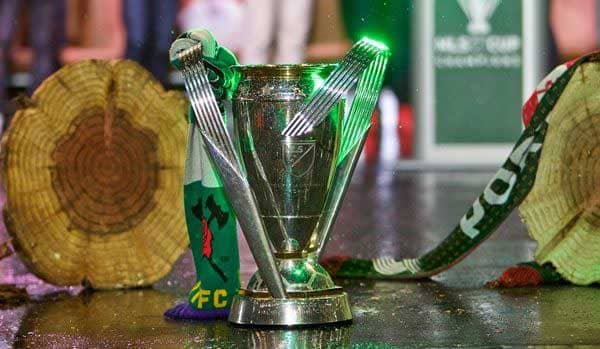 The top 12 MLS teams compete for the MLS Cup, the league's top prize.

The MLS Cup final is the pinnacle of North American football. However, the strange progression to the final means that it more often than not isn’t actually contested by the league’s best teams.

The Isles of Scilly Football League

This one isn’t complex or confusing. It’s just Scilly... and literally, too. And two.

You may recognise the name of the league from a Adidas advert ran back in 2008, in which the likes of David Beckham, Steven Gerrard and Patrick Vieira turned up to a youth training sessions on small island, which boasts a population of just 1,000 people.

The Isles of Scilly Football League is significant because it is widely regarded as the smallest football league in the world, due to the fact that there are just two competing teams in the competition - the Garrison Gunners and the Woolpack Wanderers.

These two sides play each other every Sunday over the course of the season, playing a total of 17 games throughout. As there is just one football pitch on the island, every game is a home match for both sides.

Better yet, there are also two annual cup competitions - The Wholesalers Cup and the Foredeck Cup, while the season is also opened with two of the league's sides competing for the Charity Shield.

The two-team competition has been going strong since the 1950s. However, there is a concern that it is on its last legs.

With a large number of the Isles of Scilly’s young population heading off to England to complete their education (as there is no institution beyond a secondary school on the island), the average age of both teams is reaching the mid to late 30s, with both clubs struggling to replace their ageing stars.

When the addition of St. Mirren and Dunfermline took the total number of teams in the Scottish top flight to 12 back in 2000, the Scottish Premiership faced its first tough decision - adopt the gruelling 44-game schedule that had been used in the previous top flight competition, or come up with something different.

The league opted for the latter and soon came up with a format that would see each club play a total of 38 games each year.

Much of the season uses the standard format, with each team competing in a standard table competition, trying to gain as many points as they can. They each play each other a total of three times, with sheer luck deciding whether they get the advantage of playing two home games.

Once all of these games have been played, the season then splits in half, with the top six teams and the bottom six teams dividing off into two tables.

As a result, the top six cannot slip into the bottom half of the table and the bottom six can’t climb above seventh, which often results with teams with higher points totals placing below teams with lower tallies.

Following the split, each team then plays against the five other teams in their half of the table to decide the title victor and relegated side.

Scottish football isn’t alone in it’s use of this odd system. Their United Kingdom neighbours, the Welsh Premier League, use a similar format, with its 12 teams playing each other twice in each campaign, before splitting off into two six-man leagues to decide the season’s winners and losers.

However, it doesn’t end there. While the title winners gain a place in the Champions League and second placed make the Europa League, those that finish in third to sixth, as well as the top placed team in the bottom half league, then compete in a play-off tournament to decide who gets Wales’ second Europa League spot, before a long, drawn out season finally comes to an end.

Like most of the leagues on this list, the Belgian First Division A, better known as the Jupiler Pro League, sees its 16 teams play in a standard ‘regular’ season throughout the majority of the campaign.

Each team plays one home and one away game against each of their rivals throughout the campaign, trying to notch up as many points as they possible can. Once every game has been played and the standings are confirmed, the table is then split into two play-off categories.

Strangely, at this stage the points total of each team is split in half, with half-points rounded up to the nearest whole number. This is done in order to close the gaps between teams and increase the competitiveness of the play-offs, but it is a kick in the teeth to the sides that performed so well throughout the regular season.

The top six sides enter the ‘Championship’ play-off, where they face one another two more times in order to determine the title winner, while those played seventh to 15th compete in another play-off, with the winner gaining a place in the following season’s Europa League competition.

Genk emerged victorious from the Championship play-off in 2011/12.

Until recently the Belgian top flight had featured a third play-off between the bottom two clubs, in which they would play each other a total of five times to decide who stays up and who goes down.

However, a reshuffle of Belgium’s football pyramid saw that scrapped, with the team that finishes in 15th now joining the second play-off group and the team in 16th place suffering automatic relegation.