It will come as little surprise that football is the most popular sport for Betfair trading.

No matter the day or time, it is almost guaranteed that there is a football match about to kick off somewhere, whether it’s a Premier League fixture on Saturday afternoon or a Brazilian Serie A clash in the early hours of Thursday morning.

Also, there are more national teams affiliated with the sport’s governing body, FIFA, than there are countries in the world!

But football isn't the only option available for sports trading. There are plenty of profitable Betfair trading strategies for a range of different sports and plenty of value to be had on the betting exchanges.

If you’re looking for other ways to make a profit on Betfair, you could consider trading on these sports.

British star Andy Murray has helped to increase interest in the sport in recent years.

Surprisingly tennis is the second most wagered on sport in the UK. While horse racing’s market share continues to shrink each year, tennis is growing at a rate only second to football.

It is believed that this shift is a result of the various changes that the betting industry has witnessed in recent years.

Back in 2000, bookmakers offered very few opportunities for punters to wager on tennis events. Wimbledon has always, unsurprisingly, been a big money spinner, but there were very few other tennis events that generated the same level of hype.

However, with online betting taking centre stage over the last decade, the amounts wagered on tennis each year has seen a huge increase.

The cause for its rise in popularity is the introduction of in-play betting in more recent times - just 20% of wagers placed on tennis are matched before the match begins, with 80% of all wagers occurring once the match has started. This is largely due to tennis’ scoring system, with frequent score changes resulting in often moving odds, which, for traders, offers plenty of fantastic opportunities.

Tennis is played between two opposing players on a rectangular field, which is separated down the middle by a net. Players must hit the ball over the net into their opponent’s half of the court, ensuring that it stays within bounds.

One player is assigned the ‘server’ status, which means that they start each rally by serving the ball to their opponent, which is otherwise known as the ‘receiver’. If a player fails to hit the ball back into their opponent’s half or hits the ball out of play, the opponent receives a point (1 is equal to 15, 2 is equal to 30, 3 is equal to 40 and 4 hands you the game).

A player must win six games in order to claim the set, although they must lead by two games first. Most matches will use either a best of three sets or best of five sets system, in order to determine the winner of the match.

You will find plenty of tennis trading tips online but, if you’re just starting out trading tennis on Betfair, try this simple strategy.

Make a note of any matches that will be starting soon between seeded (highly ranked) players and unseeded players. Wait for the first set to be played and check to see if any unseeded players have secured the set.

This will see the prices change in the unseeded player’s favour. However, as the seeded player will most often than not produce a comeback, you should back the seeded player at this point, wait for them to recover and then lay the same bet once a profit is guaranteed.

Winning Football Trading Strategies for Betfair Traders
Start learning how to trade football today with our complete guide to football trading. We explain how trading works and how to get started with simple strategies.
Read More 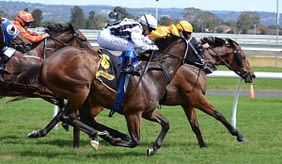 Football has overtaken horse racing as the most popular sport to bet on.

Horse racing and the betting industry go hand in hand. If fact, betting as we know it today, whereby bettors wager against a bookmaker using pre-set odds, originated at the racecourses back in the late 1700s.

It started with somewhat dodgy dealers offering odds outside of the venue, but by 1845, the Gambling Act made it a criminal offence to gamble outside of a racetrack, due to the sheer number of bookies that were turning out to be nothing more than con artists.

It remained that way until 1961, when gambling was finally decriminalised. Horse racing was unsurprisingly popular following the lift and remains so to this day.

First organised by the Carl of Yorkshire way back in 200 BC, horse racing is one of the oldest sports still around and has remained largely unchanged throughout his long history. Simply, horse racing can be defined as a race between two or more horses over a set distance to test which of the horses is fastest.

Modern horse racing sees a number of horses ridden over a course by a jockey - a professional rider who tends to be on the short and light side. While the rules tend to differ between tracks, there are two main types of horse races.

A simple horse racing trading strategy for beginners is to focus on trading before the race begins. Once a race goes in-play, prices can suffer sudden jumps in either direction which often leads to confusion and, in some cases, a lost bet.

A good way to scalp some profit prior to a race is to use a back to lay strategy. Check out a number of reliable tipsters early in the day. If there is a clear favourite that has been recommended by numerous sources, back that horse.

As the race draws nearer, more people will begin betting on the event, with the favourite likely to receive most of the wagers, causing the price to drift. You will then be able to lay the same bet in order to guarantee yourself a small profit. 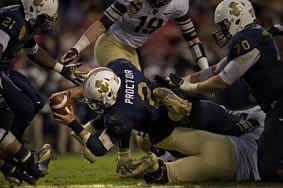 NFL fixtures are the most popular events among bettors in the United States.

While football (soccer) might be the world’s most popular sport, American football (NFL) leads the way in the United States.

Approximately 70% of all Americans with a television set watch at least part of a National Football League (NFL) game throughout the season, while Americans also gamble approximately $95 billion each year on the sport.

As course, due to the fact that gambling is, for the most part, illegal across the states, more than 95% of the money that changes hands does so illegally.

Yet, if $95 million is wagered illegally, just think how much turnover American football would produce if the practice of sports betting was fully legalised.

All in all, American football is an easy game to get to grips with. The game is played between two teams of 11 players, on a field that measures 120 yards in length, with ‘yard lines’ marking every five yards. The offensive team has a total of four turns of play to travel 10 yards down the field, or ball possession is turned over to the other team. After 10 yards have been covered, the count resets back to four.

The main objective is to score a touchdown, which is achieved by running or catching a throw in the end zone, securing six points for your team. After scoring a touchdown, players have the chance to secure one more point by kicking the ball through the goalposts, which is worth one more point. Alternatively, rather than going for the touchdown, players can kick the ball through the goalposts to secure a ‘field goal’ which is worth three points. Once a touchdown or field goal has been scored, possession of the ball is transferred to the opposition.

Unsurprisingly, the most popular events to bet on are NFL games and, due to the popularity of the sport, much like football, it is easy to find tipsters spread across the internet offering their own thoughts on the likely outcomes of games and potential bets to consider placing.

Alternatively, if you prefer to make your own decisions, you could start with this simple strategy. Wait for an underdog team to score a touchdown, pulling 7-0 ahead. You should notice that their price drastically falls as the market overreacts to the first play.

At this point, you should lay (bet against) against the winning team. The fallen price will make the liability low, while there is now a good chance that the favourite team will come back and score a touchdown of their own to level the score, which should see the back price on the team that you have laid against climb, allowing you to secure a profit.

Sports Trading for a Living

If you're planning to trade on Betfair for a living, it's best to focus on one sport and get really good at trading it. Trading on sports is difficult, so be prepared to work hard at it.

Watch the Betfair markets to determine which in-play events cause prices to move as this is what will allow you to make a profit. You could even search online for sports trading strategies which will give you ideas of where to start, but bear in mind that most of what you will find (especially for free) is rubbish.

Once you have some idea of how markets react, start testing your trading strategy ideas with a very small betting bank. You could even paper trade so that there's no risk at all.

It will take time and a lot of trial and error, so be patient. Every sports trader on Betfair is trying to beat the markets, so if you think that you're going to outsmart them all right away, think again.

You will get a headstart by joining a Betfair trading community such as Goal Profits. You will instantly benefit from our many years of trading success and also get access to the very best trading tools available anywhere online.

We focus on Betfair football trading and we know how to win.