Betting exchange trading is possible because you're able to back and lay the same outcome at different points.

As a football trader, you will attempt to predict major events - such as goals - which move market prices in a particular direction.

This price movement is what will allow you to back high, lay low (or lay low, back high) in order to lock in guaranteed profits.

Once you understand how backing and laying for profit works, the sky is the limit. A proven football betting system will grow your bank over time and it's even possible to back and lay on Betfair for a living.

First things first though, here is back and lay betting explained step-by-step.

What does Back and Lay Mean?

A traditional bookmaker takes 'back' bets. You back an outcome in a betting market and the bookie pays out if your bet wins.

However, betting exchanges - such as Betfair - allow you to 'back' or 'lay'.

As well as being able to 'back' an outcome, you can also take on the traditional role of the bookmaker and 'lay' it. In other words, your bet wins if the outcome of an event doesn't happen.

For example, let's say you are interested in betting on the winner of the Premier League.

You can see the back and lay odds below: 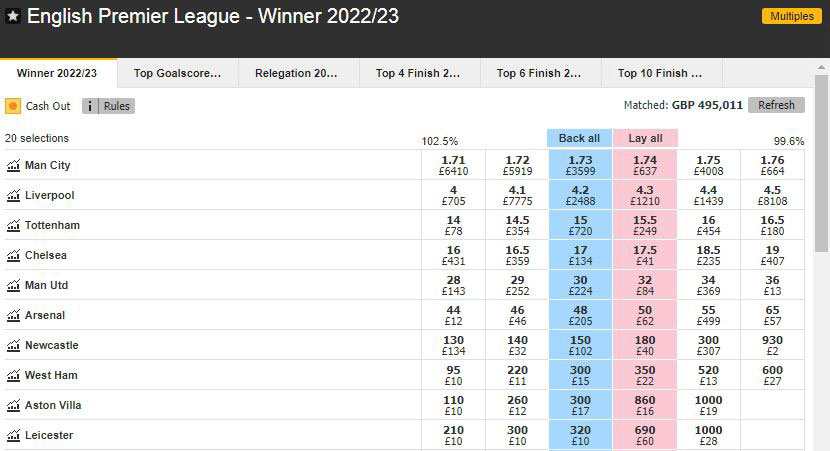 On Betfair, back odds are displayed in blue and lay odds are pink.

In this example, Man City are the current favourites to win the Premier League with back odds of 1.73. This means that if you back Man City with a £10 stake, your return will be £17.30 (£7.30 profit) if they go on to win the title.

A lay bet is the exact opposite, so you are betting on something not to happen.

If you lay Man City, you are betting on them not to win the Premier League.

If any one of the other 19 teams wins the title, your lay bet wins.

If you decide to lay Man City for a stake of £10, you will win £10 if any other team but Man City wins the Premier League.

Just as you stand to lose your stake when backing Man City, a lay bet is opposite so you win your stake if Man City don't become champions.

If Man City do go on to lift the trophy, your liability will be determined by the lay price and, again, it's the opposite of backing.

Backing and laying are simply opposites:

When placing a lay bet, your liability is always removed from your account balance as Betfair has to assume the worst case scenario - that you lose your bet.

Therefore, you can never risk losing more than the money you already have in your Betfair account.

Once the Premier League winner has been decided, the market will be settled. Bear in mind that you may have a large liability tied up for many months if you get involved in long-term trades.

How do Betting Exchange Sites Work?

END_OF_DOCUMENT_TOKEN_TO_BE_REPLACED

In the example above, laying Man City produced a smaller liability than the potential profit. It would certainly be considered a low-risk lay bet because so much could go against them over an entire season.

However, if you were to lay one of the other teams, the price would be above 2.00 and you would be risking much more money than your potential profit.

When trading individual games though, you don't always need something to happen in order to move market prices. Sometimes, you can take advantage of better prices just by waiting.

For example, the 0-0 price at kick-off will be a very high price to lay, but by half-time it's often a third of the starting price. This movement is called 'time decay' and it continues all the way to the final whistle unless a goal is scored.

If you're patient - which is essential for profitable football trading - you could lay 0-0 in a game with a team desperately trying to score as time runs out. Rather than risk many times your stake, you'll be making sure that the risk/reward is in your favour.

It's much better than sweating on a goal because you couldn't wait to get into the trade and created a huge liability!

Spend some time watching the Betfair markets and see how prices move - even without goals.

END_OF_DOCUMENT_TOKEN_TO_BE_REPLACED

Making money on Betfair is all about backing and laying at the right times.

For example, at the start of the 2015–16 season, Leicester City were available at a huge price to win the Premier League but their odds were much shorter as they closed in on the title.

Unsurprisingly, the favourites were the traditional powerhouses of European football - Germany, France and Spain. Further down the list, however, there were opportunities to back up and coming teams at high prices.

Iceland were one of the major surprises during qualifying, finishing in second place in Group A.

As they recorded a string of stunning results during - including wins home and away against the Netherlands - their odds to win Euro 2016 started to steadily drop.

It was a fantastic back-to-lay opportunity, with traders who backed Iceland earlier at odds of 500/1 able to lay at much shorter odds in order to lock in a profit.

Iceland drew Portugal, Hungary and Austria in Group F of the Euro 2016 finals, with the top two from the group going through to the next round, as well as the best third-placed team.

It was a test for them, but their fantastic success in qualifying showed how capable they had become at international level in recent years.

Greece's historic success at Euro 2004 proved that smaller countries can thrive at the European Championships and, even with the new reorganisation to a 24 team event, Iceland had a chance.

Before the tournament began, Iceland were priced on the Betfair exchange at 100 to win Euro 2016, meaning a £10 back bet on Iceland would have resulted in a profit of £990 should they have taken the title.

Once Iceland qualified from Group F, their odds dropped substantially, meaning it was then possible to place a lay bet to lock in a good amount of guaranteed profit. After their win against England, their odds came down even further.

The most popular lay betting strategy is certainly 'lay the draw' also known as 'LTD'.

Rather than waiting for an entire football season to finish, this type of trade is carried out within a single football match. It's often done and dusted before the final whistle too, so it's nice and quick!

Lay the draw is a very simple way to get started with Betfair trading and, if you're patient, it can be very low liability.

There are plenty of lay the draw strategies to take advantage of at various points during football matches. Most professional traders use it a great deal, it's a trading strategy that I use almost daily!

Click here to read more about lay the draw trading.

Once you have backed or layed a selection and something has happened to move the price, you may wish to exit your bet.

For example, if you have backed Man City at 1.73 and they're leading the Premier League by 10 points at Christmas, you will be able to lay them at a much lower price in order to secure a profit.

On the other hand, if you have layed Man City at 1.74 and they have a poor start to the season, their price to win the Premier League will soon rise. You'll then be able to back them at a higher price (for less stake) to remove your risk.

This is how football betting becomes football trading.

Working out your exit stakes can be tricky at first, but our free hedging calculator makes it very quick and easy.

How to Trade Football

Our free hedging calculator works out your back or lay stakes quickly. For example, if you are trading lay the draw and a goal is scored, our hedging calculator will tell you exactly how much to back the draw for so that you end up with equalised profit and the sought after Betfair ‘green screen’.