Making a guaranteed profit from betting on football is the Holy Grail, but can it really be done?

There have always been plenty of scammers plaguing the betting industry, though how anyone believed their ludicrous profit claims for 'just 5 minutes work' is a mystery.

I mean... how on earth did anyone believe that all the mathematicians in the world had failed to notice an amazing betting system just sitting there, while 'retired plumber Keith' had been 'cleaning up' and was now 'selling his secrets' for £97?

Come on people... get back in the real world!

To win money, you either have to take it from a bookie or another trader on a betting exchange. At the same time, they're trying to take your money from you. Do you really think it's possible to buy a simple system and immediately start to take money from others over and over again?!

These days, the scammers seem to have moved from websites full of Ferraris to Facebook. Every single day at Goal Profits, we receive many emails asking for advice about "sure" tips or "fixed" matches. It's amazing that so many people believe such things actually exist and you have to wonder how many vulnerable people are giving their money away.

So is there a way to guarantee football betting profits or not?

This has exploded in recent years, largely due to the fact that more and more punters are now betting online.

Bookies are desperate for business, so they offer welcome bonuses to attract new customers. Of course, their hope is that the new customer stays with them a while, continues to place bets and lose money (don't do that!).

You could go join up to every bookmaker and use the risk-free bets to guarantee a profit, but then you have the problem of withdrawing the funds. Bookies aren't too charitable in that regard and force you to play on until you have turned over a certain amount. They figure that most punters will end up losing in the end and have nothing left to withdraw.

The solution to this is to place matched bets, both at the bookie and also on a betting exchange. Ideally, the bet loses so that the bonus money ends up in your exchange account. From there you move on to the next bookie... and the next...

Unfortunately, you will eventually run out of bookies but you will have made well over £1,000 profit by that point. Once this happens, you can take advantage of other bonuses that the bookies throw at existing customers, plus lucrative casino offers. 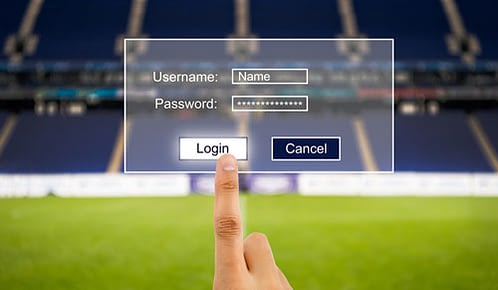 No, it's as easy or as complicated as you want to make it. Finding and keeping track of bookie offers, working out their terms and conditions, etc is a bit of a headache unless you use some of the tools out there which are designed to save a huge amount of time and effort - so do that!

Bonus Bagging is the original matched betting helper and during our review, John Paul made £341.41 profit during his first month. Click here to get started for £1.

OddsMonkey takes things a stage further and, in our opinion, is the best matched betting service currently available. They state that £400-600 profit per month is a reasonable expectation and when you click here they will even let you get started for free!

Is Matched Betting really that Easy?

In a word... yes! I've done it and I've encouraged everyone I know to do it. Why on earth would anyone decide not to take free money from bookies? They'd have to be insane!

While matched betting cannot legally be advertised as "guaranteed" profit it is about as close as you will ever get. 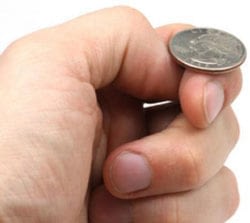 You will find plenty of these systems all over the internet, many of them promising that betting profits are 'guaranteed'. If only it were that simple in the real world...

The simplest way to explain stop-at-a-winner is to look at coin flips.

If you back heads for £1 and the coin lands on tails, you double your stake so that if it lands on heads the next time, you get £2 back to end up with £1 profit - as if the first flip had won.

If the second flip loses you are £3 down, so you double the stake again to £4 then, if the third flip wins, you get £4 back to make your £1 profit.

This stake doubling escalates quickly so that after 10 losing flips you need to stake £1,024 just to get your £1 profit!

It's perfectly possible to have 10 losing flips too; I've watched more than 20 black numbers land in a row on a roulette wheel. As the black numbers started to mount up, more and more gamblers put their money on red thinking that it "had" to come in.

Eventually it did, yes, but it didn't become more of a probability as there were still 18 black numbers and the zero, so only a 48.65% chance. The law of averages certainly doesn't kick in over so few spins of a roulette wheel.

Even if you have enough money to do it, do you think that a casino will let you bet with ever increasing ​stakes? No way! They are well aware of stop-at-a-winner systems and set table limits to catch punters out.

Ok... so even money chances are not good. How about higher prices though?

I'm going to look at a very simple "back the draw" system to try and answer that question.

Basic Back the Draw System

At the start of the 2010/11 season I was offered a football betting system which, it was claimed, guaranteed a profit. I did a bit of digging, only to discover that all this 'amazing' new system did was back the draw for every English Premier League fixture!

To be fair to the guy, if you had backed the draw every game that season you would have ended up with 26.4pts profit but it was definitely not a guaranteed profit.

His thinking was that fans bet on their teams and no-one backs the draw, so it pushes the price out to the point at which the price has val﻿﻿﻿﻿ue. That will be true to an extent, but a number of traders use back the draw strategies with much larger stakes than fans sat watching the game in a pub.

I calculated the profit figure using Bet365 prices for every game, but shopping around for the best odds makes a big difference.

For example, one of the games had the draw priced as low as 3.25 and as high as 3.50. If that doesn't sound much of a difference, there were 111 draws in the Premier League that season and the difference in profit between 3.25 and 3.50 would have been 27.75pts over the year. That's a lot of money for spending a minute at Oddschecker each time.

But anyway, it still can't have been classed as a guaranteed profit as you'd have been relying on a certain ratio of draws over the season.

So how about converting that system into stop-at-a-winner?

Stop-at-a-Winner Back the Draw System

I went through every match for every team during the 2010/11 English Premier League season to see what would have happened. It was quite a task, but extremely interesting.

I started with Arsenal and assumed I'd backed the draw for their opening match against Liverpool for £1 which was priced at 3.25. The match ended in a draw and I would have collected £2.25 profit.

I would then have backed the draw for their next match at home to Blackpool at 7.00 and lost £1.

For the next match, I would have increased the stake by 50% and backed the draw against Blackburn for £1.50 at 4.00. This wasn't a draw either, nor was the next match at home to Bolton with a £2.25 stake.

For Arsenal's next match at Sunderland I would have backed the draw at 3.70 for £3.38. This match ended in a draw and my profit would have been £9.12.

Onto the next match and back to the starting stake of £1. And so on through the season.

I went through all 20 English Premier League teams and they fared as follows: 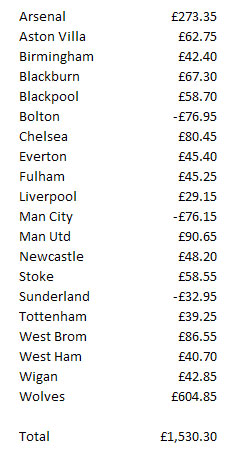 ​I used Bet365 prices for all of the calculations but it would have been possible to increase the overall profit by using Oddschecker and taking the best price available each time.

The teams which ended on a loss were because the season ended during a run of no draws. Maybe some running this system would take the overall profit for the season, while others would start the next season where they left off.

So, a guaranteed profit? Well, that depends.

Look at the profit for Wolves. It's much larger than every other team because they had an 18 match run with no draws so the stakes built up and up. In fact, the stake required reached £1,477.89.

Now, we all know that Wolves will draw at some point - even Barcelona draw now and again - but long runs will happen.

And this is the fundamental flaw with stop-at-a-winner systems. You need to have the bank, the bravery and be able to find a bookie willing to take increasingly large bets. With their technology and teams of analysts these days, it won't take them long to figure out what you're doing and then you'll suddenly find your account restricted. What will you do then?

Just as a football trader locks in profit, so do bookies.

Ok... so it's going to take more than stop-at-a-winner to beat the bookies.

The one thing that the 'back the draw' guy got right is that betting with value does guarantee a long-term profit from betting. It's the same as someone offering more than even money on a coin flip, you mathematically cannot lose over many flips.

When it comes to identifying value for football bets, however, things get much trickier.

For example, how do you judge the probability of a home win when Arsenal play Chelsea so that you can convert it into a 'fair' price and know what you need a bookie to offer in order to secure some value?

It's incredibly difficult to achieve value consistently, though we have some tools over at Trade Your Bets which run complex algorithms in order to identify value bets.

While bookies are giving out so much free cash, you should do lots of matched betting and fill your pockets with their money for as long as possible. Once they restrict your accounts, switch over to value betting and learn to trade.

Nothing is ever 100% guaranteed, but you can put the odds firmly in your favour if you're smart.

3 thoughts on “Can You Make a Guaranteed Profit From Football Betting?”