On Wednesday 18th January, Nantes played Caen in France's Ligue 1. At first glance there was nothing of interest from a trading point of view, but I set out to dig deeper into our Team Stats pages in case there was something I could use at some stage of the game.

I ended up making a simple set-and-forget profit of £50 and here's exactly how I did it.​

Firstly, I looked at the main trading stats. I saw plenty of red, but not much green. In fact, the only consistent green came in Caen's away games against bottom half teams. 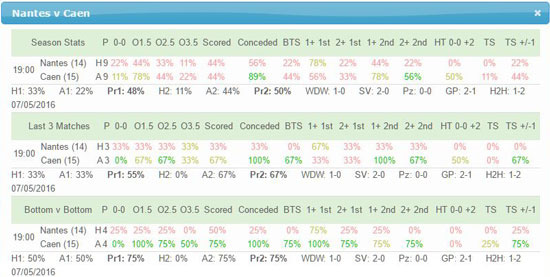 I then looked at the league table analysis page in the Goal Profits Members Area. That was a similar tale of woe, with Nantes bottom of the home table and Caen bottom of the away table! Both teams were also below par in the first half and second half tables.

The only point of interest was Nantes being 9th and Caen 10th in the form table, but even that was skewed. While Nantes were riding high (5th) in the away form table, at home they were 16th. And Caen were placed 5th in the home form table, but 18th away.

I did find something in the bottom half table; Nantes' record at home v bottom half teams was W2 D1 L1 while Caen had gone W0 D0 L4 away. When digging further, I saw that both of Nantes' victories were 1-0 and the draw was 0-0. The loss was 0-3 and I couldn't see that happening in this game.

I knew from earlier that Caen's games away at bottom half teams had seen goals. However, these 4 were the only away games that Caen had scored in and Nantes had kept a clean sheet in 4/9 games at home.

I was leaning heavily towards a low scoring game, perhaps 0-0/1-0, considering the facts that Caen had only kept a single clean sheet away and 3/4 Nantes home games had ended on those scores.

The Goal Patterns Team Stats page was interesting; showing me that Caen had not taken the lead in any of their 9 away games this season. I could also see that Nantes had scored first at home only 3 times and 2 of those ended 1-0.

Again, that pointed to a low scoring game - perhaps even 0-0. After all, I already knew that Nantes had scored in only 4 of their 9 home games and Caen had only scored in 4/9 away.

Checking the Betfair markets, Nantes were favourites though priced well above 2.00. Under 2.5 goals was priced at 1.70 which meant the markets agreed that a low scoring game was most likely.​

So now came the interesting part... looking for the best risk/reward.

I was prepared to risk up to £100, so here were the options I considered:

I liked the look of option 5 and checked the 'Early Bird' strategy page in the Goal Profits Members Area. This showed 45% value for Nantes to score first, but not much liquidity. That was ok as I would not need to trade out.

There was a lot to support 0-0/1-0 and I decided to go with the 'Next Goal' market. It meant I'd be in a winning position at 0-0 and a goal for Nantes would land the full profit with no need to trade.

I placed my bet after 15 minutes had been played, just to make sure that the game started as expected. I didn't want to see Caen forcing lots of shots and corners, though Nantes attacking would have been fine.

It did cost me a little more to wait as the price rose to 3.10, but it was worth that to be able to check how the game had started. My liability was slightly higher than £100 too, in order to target exactly£50 profit after commission.

Had I missed a Nantes goal by waiting, that would be ok - no risk and no loss. Yes, I miss a number of (would be) winners but - much more importantly - I miss (would be) losers.​

I don't get annoyed by missing out on opportunities like many novice traders do. It's a question of mindset; being prepared to wait for the perfect conditions before putting my money at risk.

There's a reason why impatient traders lose money long-term; and not just when trading football on Betfair either!

As the game approached an hour played, the score was still 0-0. I was still in a winning position.

The in-play stats at this point were 3-1 corners and 11-5 shots in favour of Nantes which was just what I wanted to see. Of course, it only takes one shot for a goal so I was still in danger of losing my £100 and I decided to look at options for trading out - or at least reducing the liability.​

I could have removed my liability, but I would have also be losing 60% of my potential profit. I decided that with the in-play stats firmly in my favour, I would hang on for another 10 minutes and then check prices again.

I could have also traded out, securing around £15 profit no matter which team scored first (or didn't).

Time decay was working with me, increasing the price to back Caen with every passing minute and, therefore, increasing my potential profit should I have wished to trade out.​

On 65' the home team scored the goal I'd been waiting for and my £50 profit was in the bank. The game ended 1-0 - as expected - and my trading for the day was done.

A dead easy winner, identified by digging into our Team Stats pages. I know nothing about either team, their players or manager; and nor do you have a need to. In order to make consistent profits, all you need is access to Team Stats.

£50 profit from no more than 5 minutes ​of research and that's the monthly subscription covered, plus a profit on top. Now, the next 29 days worth of profits are free!