I am going to share with you exactly how I banked £375.51 profit on a busy Tuesday evening of football. I will share my strategies, thought processes and even my handwritten shortlist - I hope you can read my writing!

Tuesday 4th April 2017 had a decent fixture list, especially in England. For me, it was a night off from Goal Profits chat room duty and a chance to fully concentrate on my football trading.

Well before kick-off, I built up my shortlist from the Team Stats software at Goal Profits and the Value Trades list at our Trade Your Bets site.

Many people still claim to "not have enough time for football trading" so I timed my research and it took exactly 43 minutes. To me, that's not much time at all - not even as long as an episode of Dexter!

I really don't know how anyone can expect to outsmart the bookies and everyone else on Betfair without putting in some time in and with Team Stats it's never been quicker or easier. 95% of the work is already done!

This was my shortlist for the night... 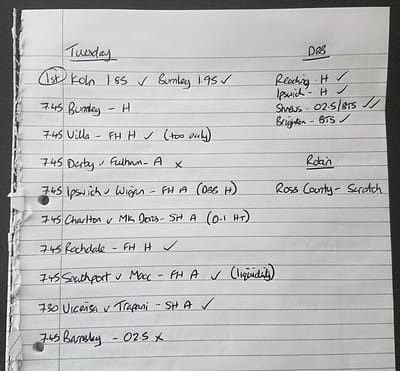 I like to trade with a pad of paper in front of my keyboard so that I can jot things down as games progress. It's especially useful when I'm also in the Goal Profits chat room as there's a lot going on!

On the face of it, there look to be a lot of selections. However, I tend to go with a small number of trades with larger stakes; those in which I have high confidence.

The rest have much smaller stakes, often trades in which I'm testing new angles or something like that. Also, when backing at high prices I use far smaller stakes as there's no need to go big - and they lose more often than not anyway (hence why they are high prices).

My two high confidence trades this evening were Burnley and Reading to win at home, but here's the full breakdown.

I picked the home side to score first here. It had happened 16 times in Koln home games and Frankfurt away games (total of 25 games) plus more than 50% of those games had ended in a home win. Koln were not in great form, but Frankfurt had only scored 1 goal in their last 6 away.

Burnley have been sensational at home this season and Goal Profits members have made a huge profit from backing them over and over. This was a no-brainer, the home side having scored first in 11/15 at home and Stoke struggling away. The only surprise was that I could back it as high as 1.95!

Koln and Burnley paid £130.38 profit from a £50 stake. I would normally stake less for the double (or more for the singles) but I was very confident with both selections and Burnley had already put plenty in the bank this season.

Quite simply a ridiculous 2.60 on offer and easy money, yet again from Burnley at home this season. Incredible value bet and the market doesn't seem to be waking up to the fact that Turf Moor is such a stronghold. Of course, Team Stats tells us exactly that and allows us to profit.

I wanted to back Villa to win the first half, but their goal came too early. I was trying to squeeze a bit more out of the price and missed out. Always nice to make the right call though!

Among other things, Villa were 4th in the first half home table while QPR were 19th away. Also, Villa were 2nd in the home form table, with QPR way down in 18th. Team Stats made it a very obvious selection, just timing that let me down.​

Fulham have been very solid away from home this season and, going into the game tonight, they were:

That's really impressive and I was only too happy to back them at 3.05. I would have backed more had the in-play stats been strong after 20-30 minutes, but Derby took the lead after just 8'.

I layed Derby and reduced the red once it went 1-1, then tried for a late goal to make scratch overall but nothing doing. Only a small loss though.

The League Table Analysis page strongly suggested that Wigan might be leading in the first half, but this was also on Daily Best Bets as a home win. I backed Wigan a little then layed the draw to cover it and Ipswich taking the lead wasn't a problem.

With conflicting stats I was only in for a small stake and would have looked to perhaps increase at half-time, but there was no need with another winner locked in. Just a very small loss here for the saver.

MK Dons have done well in the second half away from home this season, but they were already 0-1 up at half-time so no trade.

This was a very strong first half home win selection which Team Stats highlighted, but Port Vale had a man sent off before I'd had a chance to stake too much. An easy profit though, with the home side quickly 3-0 up.

Another very obvious first half selection, this time for the away win. I tried to get some money on but there was not a single penny matched in the Betfair Half-Time market before the away side scored two quick goals. Would have been another good winner, but just no liquidity.

The League Table Analysis showed this one to be a good candidate for an away win in the second half, but in-play stats were not all that special. I went in with a small stake and was rewarded with a profit as Trapani won 0-1.

I fancied this one for Over 2.5 Goals due to the fact that Barnsley had gone 5 home games without one going over and Cardiff had never gone under away twice in a row this season. Perhaps a little tenuous, but these runs do come off often enough.

With so much profit banked elsewhere, I was able to also look for Over 1.5 Goals and even just one goal late on to make scratch, but the teams played out a 0-0.

I went for a correct score trade in Scotland and it was looking good, until Ross County picked up a red card. A late penalty saved the day though and a simple scratch.

One more goal would have landed £200 or so profit.

As you can see above, I had also backed 5 more selections. This were from Value Trades (formerly Daily Best Bets) a list produced for members of our Trade Your Bets site.

Reading v Blackburn Rovers was the main one I liked the look of and a good profit there at an excellent price. Why 4th v 22nd was 2.30, I'll never know - huge value!

I'm not a fan of Both Teams to Score bets, but they have been in great form lately so I went in with small stakes. I was happier with the Over 2.5 Goals selection and banked a larger profit from that.

5/5 winners though for zero effort and it can never get easier than that!

So that was £375.51 profit for very little effort. I was very comfortable throughout, set up nicely by those two big winners at Burnley and Reading.

I could have saved myself a bit of that loss at Barnsley​, but with such a large profit banked I wanted to try and make scratch with a goal or two. In hindsight, 13th v 14th at this stage of the season was perhaps a game to stay away from.

A very successful night of trading overall though and on to the next one!​

Edit: The next evening landed another £51.19 profit, largely thanks to our '2001' strategy. Only a small profit at Southampton as I had a huge green waiting for Crystal Palace to go back in front.