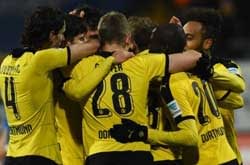 Heroic defensive performances and dominant possession are all well and good, but they don't count for much if you can't put the ball in the back of the net.

Goals win games and while we all love to see 'the beautiful game' played in a free-flowing, pass-and-move style, it's still a results business.

Brazilian legend Pelé - widely regarded as one of the greatest players of all time - was extremely skillful with the ball at his feet and great to watch, but he is best known for scoring goals - lots of them.

And look at Leicester City’s shock Premier League title victory in the 2015/16 season. Claudio Ranieri’s side did well in defence, yet still conceded regularly. Their play was somewhat simple and straightforward and they were often the team with the lower possession stats, particularly so against the so-called 'better' sides.

However, they knew how to score goals. For all the talent available at Tottenham, skillful passing at Arsenal and sheer quality at Manchester City, the best goalscorers lifted the Premier League trophy.

The most memorable games are the ones with an incredible amount of goals. Manchester City’s 6-1 demolition of Manchester United in the 2011 Manchester Derby, for example. Or Bayern Munich’s 5-1 crushing of Arsenal in the 2016/17 Champions League.

If you thought those might be the most goals scored in a football match though, prepare to be shocked!

During the early days of football, games ending with high scores were much more common, considering that the game had yet to become professional and highly organised teams would often face off against amateur sides.

This was particularly the case in the newly established cup competitions, many of which allowed teams with no experience to enter, which often resulted in lowly sides coming up against vastly superior opposition.

This was the case in the 1885/86 Scottish Cup, the 13th edition of the annual tournament. The draw saw newly formed club Bon Accord pitted against experienced side Arbroath, who had already played in the tournament seven times, in the first round.

The difference in level became apparent when Bon Accord arrived in Arbroath without a team kit to play in. It was clear that Arbroath were likely to record an easy win, but few expected the eventual margin.

Arbroath ran riot, scoring 15 goals before half-time to go in 15-0 up. While many teams slow down in the second-half, the Scottish side kept up their dominant display, netting 21 more times to end the game with a 36-0 victory - the largest margin of victory and the most goals in a football match in the history of the sport at the time.

And for Arbroath goalkeeper Jim Milne Sr, the easiest match in his career, as he failed to register a single touch of the ball throughout.

Arbroath’s huge win would hold on to the record for the most goals scored in a match for a total of 117 years, until the record was eventually beaten by Antananarivo rivals AS Adema and SO l’Emyrne in 2002.

These two teams played in the Madagascan top flight - the THB Champions League - and they completely destroyed the record!

Madagascan side SO Emyrne were responsible for the most goals in a football match with 149 own goals.

SO Emyrne had won the THB Champions League in 2001. However, 2002 was to be AS Adema’s year. In fact, by the time this match was played, AS Adema had already wrapped up the title, after a draw for SO Emyrne in their penultimate match saw them concede defeat in the title race.

The club saw a late penalty given against them in that game, which was undeniably a debatable call by the referee. Of course, given the ramifications, the club weren’t so happy with the decision and decided to stage a protest in their final game against champions AS Adema.

From the get go, the SO Emyrne players kicked off and immediately passed the ball into their own net. Unsurprisingly, by the time the referee blew the final whistle, the game had smashed the record for most goals in a match by a country mile, ending 149-0 to the home side.

The silly stunt cost the SO Emyrne coach, as well as four players (including the Madagascan national team captain) their jobs, with the Football Association handing out three year bans to each of them.

Yet, despite the punishment, the thrown game earned them an otherwise unlikely place in the Guinness Book of Records.

While some way off of AS Adema’s 149 goal victory, this game prompted many of the debates that are still being discussed to this day about the gulf in class between many sides at international tournaments.

While you would expect the highest scoring international victory to be held by the likes of Germany or Brazil, who have dominated international football over the years, the record is actually held by Australia, who are themselves considered minnows when judged against the world’s very best sides.

However, one thing is clear - no matter how they match up against the likes of Germany, they are a far superior side to American Samoa, as they proved during their 31-0 triumph over the tiny nation during the Oceanian 2002 World Cup qualifiers.

Australia's Archie Thompson also broke the international record for most goals in a game, scoring 13.

At the time, Samoa had yet to record a victory as a FIFA recognised team and were ranked among the world’s worst sides, while Australia went into the game having beaten the record for the biggest international win with a 22-0 victory over Tonga just two days prior.

After smashing their own record, the huge victory meant that Australia had scored 53 goals in the space of just three days and 180 minutes of football, cementing their place in the sport’s history books.

Unsurprisingly, they topped their qualification group with four victories and a goal difference of +66.

If you thought SO Emyrne throwing their game against AS Adema was bad, the ongoings in the Nigerian Nationwide League Division back in 2013 will have you livid!

In a case of blatant match fixing, four clubs were eventually banned from competing for 10 years, while all of the players and officials involved in the two fraudulent matches were handed lifetime bans from the sport.

The games involved were Plateau United Founders vs Akurba FC and Police Machine FC vs Bubayaro FC, which were set to decide the outcome of who would achieve promotion to the lowest level of the Nigerian professional football league system.

Plateau United and Police Machine were both level on points and, with both teams likely to produce victories, goal difference alone was set to decide the affair.

By half-time, Plateau United were 7-0 up, while Police Machine were leading by 6 goals to nil. However, things quickly got out of hand, as both teams’ opponents began to put the ball into their own net following the break, with the games eventually ending 79-0 and 67-0 respectively, earning Plateau United promotion.

Unsurprisingly, the Nigerian Football Federation realised that something wasn’t quite right. It never came to light who exactly was involved or how the match-fixing was organised, but the federation quickly moved to punish all four of the involved teams.

The historic feat took place at the 1954 tournament, with host nation Switzerland eager to make it through to the semi-final stage for the first time in their history on their own patch.

It seemed early on that they would do just that, as they raced into a three goal lead, scoring in the 16th, 17th and 19th minute.

However, semi-finalists in 1934, Austria weren’t willing to give up without a fight. Goals in the 25th, 26th and 27th minutes levelled it up, before they scored twice more to go 5-3 ahead.

Numerous international sides have produced 10 and 11 goal games since, yet that match still serves as the only World Cup game to have provided 12 goals.

The 1954 World Cup proved to be a record-breaking tournament all round. Aside from the Austria vs Switzerland game, it produced a number of other huge wins, such as Hungary’s 8-3 victory over West Germany and West Germany’s 7-2 win over Turkey, which helped the tournament to set the record for the highest average of goals scored per game.

In the grand scheme of things, the Premier League era is still somewhat young, so there hasn’t been a whole lot of time for many records quite as ridiculous as the ones higher up on this list to be set.

The Premier League has had some crazy results in the past. And yet, with the overall quality of the teams in the division being somewhat close, British football fans are rarely treated to the kind of one-sided games that are staged elsewhere.

There is the occasional 7-0 landslide once every few seasons, or a thrilling 5-5 draw. However, those sort of results are incredibly rare.

The best of them all was played by Portsmouth and Reading during the early stages of the 2007/08 campaign, which set the record by becoming the first Premier League game to see 11 goals scored.

Surprisingly, up until the 75th minute, the game had seen just six goals scored. However, Niko Kranjcar’s 75th minute strike, which put Portsmouth 5-2 ahead, prompted a steady stream of goals in the final stages of the game.

Both sides netted twice more in the final 15 minutes, which saw the game end 7-4, confirming the unlikely record.

Benjani scored a hat-trick in Portsmouth's 7-4 victory over Reading.

The record for most goals in a single European Cup game goes to KR Reykjavik and Feyenoord, who produced an incredible 14 goal game in the first round of the continental tournament back in the 1969/70 campaign.

Unsurprisingly, it was Feyenoord who prevailed by 12 goals to two, and they added another four goals to their tally in the second leg, before going on to lift the trophy with victories over AC Milan and Celtic.

While undeniably impressive, high scores were frequent in the tournament back then, due to the sheer difference in class between many of the teams. In that same round, for example, Leeds United secured a 10-0 win over Norwegian side Lyn, while Real Madrid triumphed 14-1 against Cypriot side Olympiakos Nicosia on aggregate.

With six goals scored in the first 30 minutes of play, that game will be recognised as one of the best affairs in European competition for a long while and unquestionably trumps Feyenoord’s (still impressive) win.

Footballers Gambling: 7 Stars Who Refused to Follow the Rules
There have been lots of stories about footballers gambling over the years, even though players in England's top eight tiers are banned from betting on football. Here are a few of the football stars who refused to follow the rules.
Read More
5 Unusual Football League Formats Which Can be Confusing!
There are some unusual football league formats around the world. Not every country likes to stick with the standard 20 teams, 38 fixtures and one champion!
Read More
Coronavirus: When Will Football Leagues Start Playing Again?
Coronavirus has suspended most football leagues around the world, but when could Premier League, La Liga, Bundesliga, Serie A and other competitions return?
Read More