Keeping track of inplay football stats used to be a nightmare, but our Live Stats Module makes it easy to track dozens of matches all at once!

In the past, you had to be sat at your screen for hours on end, continuously scribbling down numbers and trying to work out where the action was. All of this left you struggling for the time to actually trade.

Our Live Stats Module automatically tracks shots, corners, dangerous attacks and possession for every game. It also displays the latest score, Betfair prices, time added by the referee and even which fixtures qualify for various Goal Profits strategies.

However, the best part of our Live Stats Module is that it shows you exactly what has happened during the previous 10 minutes of every inplay game. The LSM calculates a rating based on various factors so that you can see at a glance which teams are really going on the attack!

There are four tabs; 'Scheduled Games', 'LIVE Games', 'Finished Games' and 'My Games'.

On the LIVE Games tab you will find 'Quick Filters' which allow you to track all live matches for various scenarios. For example, if you want to see all matches which qualify for the 65/75 and M22 trading strategies, simply click on those buttons so they turn green and all qualifiers will show up as and when the qualifying criteria are met.

You can also create a list of 'My Games' and then set your own filters.

Perhaps you add every English league game on a Saturday afternoon, then ask the Live Stats Module to only display those which have had at least 5 shots during the past 10 minutes, or maybe just the games in which the score is level and the home team has had at least 10 dangerous attacks in the last 10 minutes, or perhaps you only want to see games which are 0-0 with 70 minutes played.

It may be that you simply want to hide games which have had a red card. You can do that too!

There are endless possibilities and we're constantly working to add even more features.

Here are some examples of how I have used the Live Stats Module inplay to make some money in Betfair football markets.

Here's an Ecuadorian game between Emelec and Delfin which is approaching half-time. It's an older version of the LSM, but you can see that the home team have been attacking hard during the previous 10 minutes.

The LSM calculated a Rating (Rtg) of 22-2 which is pretty high and 2 minutes later, the home side scored.

I had backed the half-time home win and layed the half-time draw for a total liability of £13. After trading out, I was left with a healthy £54.72 profit. This was a very quick inplay trade, perhaps 5 minutes in total. 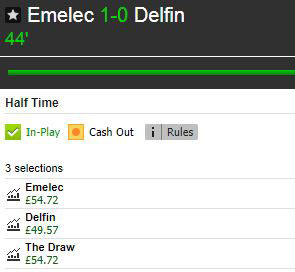 Here's an Austrian Erste Liga game which the LSM told me qualified for M22, a strategy in which we're looking for an equaliser to make the score 2-2. It also showed that the home team was on the attack and calculated a Rating of 16-0.

It was far too early for a traditional M22, but I had layed Wattens at 1.30 and was waiting to be matched when the goal went in. No profit that time, but another example of how the LSM gave me a huge advantage.

Here's a game in the Swedish Superettan with Helsingborgs well on top:

As you can see, Helsingborgs scored right as I was trying to get the screenshot above and I didn't get all of my stake matched, but enough to make a little over £20 after trading out. This trade took all of a minute! 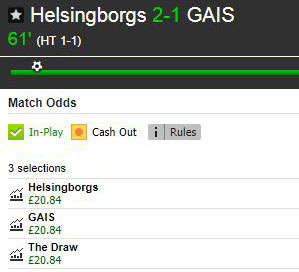 Finally, an end of season game in Italian Serie A between two teams with nothing to play for. The players certainly weren't thinking about their summer holidays!

Tons of end-to-end action and it didn't take long for a goal to arrive:

A three minute trade and a nice profit in the bank. 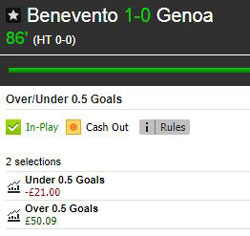 There are so many ways to make a profit with our Live Stats Module, especially when combined with the rest of Team Stats. If you're looking for a particular team to score and the LSM shows you that they're attacking hard, it adds massive confidence to a trade.

All Goal Profits members get full access to the Live Stats Module from day one for no extra cost.