The two Premier League fixtures on New Years Day 2017 were of no interest to me from a trading point of view, but there was a full programme of English non-league fixtures.

While there are often plenty of goals, there's not too much liquidity and I could not send a large number of Goal Profits members into markets like that. Trading individually is one thing, but lots of traders going after the same liquidity at the same time causes no end of problems.

My case study a few days ago has received incredible feedback - click here if you haven't read it - so I decided to take advantage of the quiet time and record another day of Betfair football trading.

As before, I used £10 stakes. This was partly to show that you don't need a large bank in order to trade football but also because liquidity was not the best.

As I explained in my first case study, I am looking for three main things:

When I spot something of interest in Team Stats I make a note, add the match to Flashscores and then I can easily keep track of it in-play.

It's a bit different when the fixtures are non-league; liquidity is often tight and many of the games don't even go in-play on Betfair.

More important than that, however, is the fact that non-league teams are full of non-league players:

The overriding characteristic of these players is inconsistency:

Therefore, while goals are often plentiful, they don't always go in at the right end of the pitch! With this in mind, I prefer to back goals rather than teams when trading smaller leagues. That way, any goal is good news and I'm not relying on individual team performance.

When I am interested in backing a team, I make sure to check that the match odds prices are where I'd expect them to be close to kick-off. I don't have the first clue about players in lower leagues, but markets do. While Real Madrid can bring in another international striker when Cristiano Ronaldo misses a game, the likes of North Ferriby United don't have that luxury.

If a strong home favourite is not priced accordingly, I know that something is up. I can then choose to ignore the game completely, do some digging into previous team line-ups on Soccerway or look at what is posted on official club Twitter accounts.

Trading the first half

Before kick-off today, I had two main games of interest; Halifax v Darlington and Lincoln City v Guiseley. I had lots of notes about other fixtures, but these were the two which Team Stats indicated were the strongest opportunities.

I fancied goals at Halifax and a possible correct score trade, but there was not even £200 matched in the Betfair correct score market (by half-time there had still only been £282 matched!). There was no way I could possibly trade with liquidity so poor and it was 1-1 after 22' anyway, so no chance of getting in for a 'Robin' trade. It ended on a target score too, which would have been a great profit.

Lincoln were very strongly expected to win and I hoped that the game could get to the break level, then I'd have a chance of a trade with decent risk/reward. The home win was priced around 1.50 to back before kick-off which told me that the line-ups were as expected and the market shared my view of a 'banker' home win. 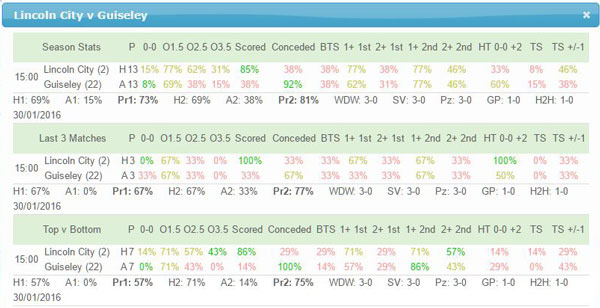 Looking at our Team Stats software, there were lots of reasons to like the home win:

Of course, always expect the unexpected... Lincoln scored an own goal after 12 minutes to give Guiseley the lead!

Team Stats showed me that Lincoln had gone 0-1 down at home three times this season and all three had then gone 1-1. The away goal had certainly done me a favour in terms of shifting the home win price higher, though it was still under 2.00.

Lincoln had scored in 9/13 first halves at home, but the in-play stats were not too hot. I decided to wait and see if they improved as the half progressed but, after 30' had been played, they were still fairly weak.

I decided to lay 0-1 in the half-time score market at 1.80 (1pt) so that a second goal before the break would make a profit. Waiting for that price meant that I could also lay another game late in the half at 1.20 to give me two chances of a goal with only 1pt at risk.

Team Stats showed a couple of games with high first half goal probability; Macclesfield Town v Tranmere Rovers and Sutton United v Bromley. There had already been three goals at Macclesfield, but Sutton was still 0-0. In-play stats showed the home favourites leading 3-2 on corners and 10-4 shots so I layed 0-0 at 1.20 (1pt).

My worst case position at half-time would be a 1pt loss, best case with a goal in both games would be 2pts profit. Sutton scored on 45+4' from a free-kick to leave me with a small profit overall.

Trading the second half

Maidenhead v Wealdstone was 0-0 and on my shortlist for a second half trade. In-play stats were good, but Betfair did not have a live feed so all markets were suspended. The game ended 2-0 so would have been a profit, but that's ok - making the right calls is important, even when I can't take advantage and trade them.

I went back to one of my main trades; Lincoln City v Guiseley. Team Stats showed me that Lincoln had won 7/13 second halves at home, while Guiseley had lost 6/11 second halves away. Adding that to all the stats I'd already looked at, I determined that I was happy to go against the away win.

Lincoln equalised with a penalty on 57' which gave me more than half an hour to find a winning goal. However, by 75' the in-play stats didn't show the sort of dominance I'd have expected from such a strong home team battering a weak defence.

I backed Guiseley at 11.00 (0.1pt) just in case they sneaked a late goal. That left me with 0.3pts liability on the away win, 0.1pt liability on the draw and 1.6pts profit on the home win. Very comfortable.

At this point, I checked on other games which I had identified during my profiling as having potential for goals. Halifax v Darlington and Southport v Wrexham were both 2-2 and had good in-play stats which I had been tracking since half-time:

Plenty of action and Team Stats confirmed that late goals were a feature for all four teams. I layed U4.5 goals at both Halifax and Southport at 1.70 for 1pt each.

I now had three games in-play and my worst case scenario was a loss on the day of less than 1.5pts. However, the potential reward was far bigger and just one goal for any team (except Guiseley) would have left me with a minimum of scratch.

It was strong position to be in; I had five teams looking for winning goals and around ten minutes for them to do their thing. Team Stats had already identified that goals were likely and in-play stats had confirmed that the games were lively. Just like the first half, I spread my options about so that I had a lot working in my favour.

Guiseley picked up a red card on 80', then Southport scored...

Southport regain the lead with a cracking strike from Liam Nolan, who scores his second after a cross from Ben McKenna (3-2) #SOUvWXM

That goal ensured that I'd be in profit for the day and I still had time for more goals elsewhere. That was the cue for Lincoln to take the lead and a quick trade locked my profit in there too.

Guiseley had another man sent off and conceded a third goal to end the game well beaten. Halifax v Darlington had 5 shots in the last ten minutes, but no goals.

I ended the day with 1.95pts profit for the day and a happy start to 2017. No big liabilities to worry about at any point, plenty of chances for profit, job done.