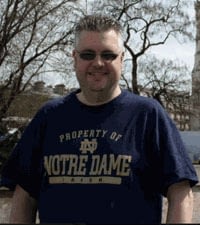 Back in 2011 when the internet was swamped with dodgy tipsters, I set about building something new and different. My goal was to show ordinary people - like you and me - how to win on Betfair.

Many years later and Goal Profits has helped many successful traders get started. We've won plenty of awards for our efforts, but I started out in exactly the same place as everyone else - on day one of my Betfair football trading career, I knew nothing!

I was born and raised in Bournemouth, so became a lifelong Cherries fan. This was back when AFC Bournemouth were struggling to stay in business, let alone enjoy Premier League football! I can confirm that the drive home after a 2-0 away defeat at Darlington is very, very long...

Workwise, I was employed by BP for fifteen years. I worked my way up through the company and held a number of Head Office roles, including Fresh Category Manager and Retail Operations Support Manager.

One day, I decided that I'd had enough of working crazy hours for little reward. I started an eBay business and began trading football on Betfair as a hobby.

As most people do, I started out by blowing my bank! I had no bank management in place, no discipline and – being a typical bloke – thought I knew enough about football to easily win money.

I searched Google for things like "how to always win football bets" and bought a number of football betting strategies, having been sucked in by photos of swimming pools and Ferraris.

The usual mistakes that nearly everyone makes!

Having been brought back down to earth with a bump, I rebuilt my trading bank with Bonus Bagging and gradually learned how Betfair football trading really works.

If anyone tells you that trading isn't difficult, they're lying. It's incredibly tough and is so much more about mindset, discipline and patience than it ever is about football knowledge.

Once you 'get it' though, it's the most amazing job in the world!

The Birth of Goal Profits

Back in the day, I used to keep spreadsheets of football data. I manually updated results, goal times and all sorts of other stats each day for around a dozen leagues. It took a lot of time and - because it was insanely boring - was prone to human error.

For a bit of excitement, I entered a tipping competition - and won! The guy who ran it asked if I would like to start a football trading tips service and I agreed to give it a go.

Previously, I had fallen into the trap of buying football betting systems and following various tipster services. In fact, most betting websites back in 2011 were peddling PDF files promising "football trading secrets" and that sort of rubbish, so I knew that Goal Profits had to be different in order to truly help people achieve what they wanted from betting/trading.

There was no website at first (and I had no idea how to build one!) but I spent a lot of time learning - while continuing the mundane spreadsheet updates - and the community grew.

In 2013, Kevin Laverick and I set about developing software which would do the spreadsheet work for us. There were a number of free football stats websites online, but none of them catered for professional football traders (and still don't).

Rather than simply automate what we were already doing, however, we were very ambitious! We brainstormed for weeks to create the ultimate wishlist for football stats software, then worked out how to build it.

The initial Team Stats development was incredibly expensive, but it revolutionised the way that Goal Profits members approached football trading. It covered many more leagues than we could have ever managed manually, provided far more information and - crucially - it was in a format designed specifically for Betfair traders which cut research time dramatically.

Our unique and exclusive Team Stats software has continued to grow ever since.

It's now a fully functional research tool, capable of identifying selections automatically each day for all of the Goal Profits football trading strategies. It calculates value, pulls in Betfair prices for comparison, checks results and even analyses long-term trends all over the world.

It builds and compares hundreds of league tables daily, identifies profitable trading opportunities that everyone else misses, even tracks and analyses in-play stats as games are played. Team Stats gives Goal Profits members a huge advantage over everyone else on Betfair.

By the time you read this, there are bound to be additional features too since Kevin and I are constantly developing new ideas.

With so many resources now available, new members were feeling overwhelmed! To fix this, I created 'Launchpad' which is a football trading course which introduces the trading tools one by one and teaches complete beginners how to build and operate their own portfolio of systems.

It is completely free for all Goal Profits members (fully updated for 2019) and immediately transformed the fortunes of a number of members who had previously been falling short of their trading goals.

Following on from Launchpad is 'Orbit'. This is for more advanced traders who are having success, building their banks and looking to move to the next level. It offers ideas and advice for working trading banks much harder and generating life-changing wealth.

Goal Profits has won a number of awards since 2014, most of them voted for by the general public.

We regularly receive emails to say that we're head and shoulders above any other community out there and we aim to keep it that way. Paul works full-time supporting members, plus Kevin and I are readily available to help and support everyone as they learn how to trade properly.

In addition to all that, we even arrange free trading workshops where members can trade with us live. How many others in the betting world are prepared to give up their time for free in order to help their members succeed?!