As a Bournemouth fan, I was looking forward to the visit of Arsenal, but none of the games were of much interest to me at the start from a trading point of view.

Team Stats showed a few angles I could work with if in-play stats were supportive, but I didn't have much confidence so small stakes only to see if I could add a little to my trading bank.

As it turns out, almost everything went to plan (except for Bournemouth's collapse against Arsenal!) and I ended up with a profit of £78.30.

This case study looks at: 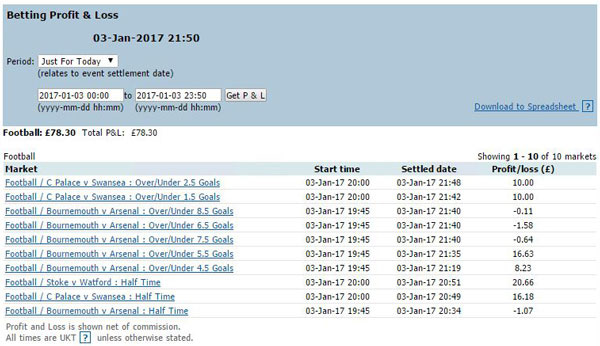 A very strong angle, but I wanted to see it backed up by in-play stats, just to be sure. After all, while Stoke appeared to be strong at home against bottom half teams, they had only scored 11 goals at home in their 9 home games overall.

I didn't have high confidence and decided to choose between backing Stoke for the half-time or full-time win in-play after seeing how the game started. In-play stats showed the home side well on top, in fact by half-time Stoke were leading the corner count 5-0 and the shot count 10-3.

Around the 20' mark I backed Stoke to be leading at half-time at 3.40 and drip-layed the draw, just in case Watford could sneak a goal.

I didn't touch anything in the second half as Stoke cruised to an easy 2-0 win. 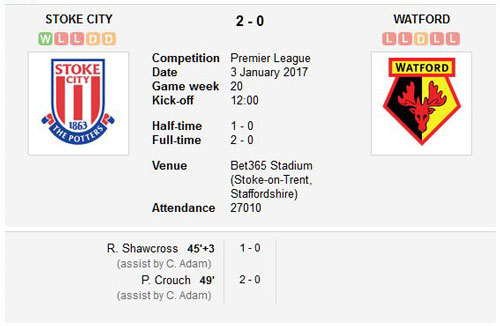 Nothing of note in Team Stats here, except that two poor teams were playing each other. The market fancied a home win and that was not a surprise, given that Swansea were in poor form and their last game was a 0-3 loss at home against Bournemouth.

This was Palace's first home game under new manager Sam Allardyce and I expected them to be fired up. I was watching the in-play stats for signs that they were attacking, but at half-time they were trailing 1-2 on the corner count and 1-6 on the shot count.

With Swansea obviously having a go, after 30' I decided to back the half-time away win at 7.00 for a small stake and lay the draw to cover a home goal.

I tracked the in-play stats throughout the second half, looking for signs of life from Big Sam's new team. By 80' there had been 4 second half corners (3 for Palace) and 5 shots (4 for Palace). They were obviously having a go, but were not forcing as many corners and shots as I'd expect from a team which was really dominating the game.

Rather than lay Swansea at 1.40, I decided to lay U1.5 goals at 1.80 instead so that a goal either way would count. I also layed U2.5 goals at 1.10 as it was cheap and both teams needed a win. If there was a quick equaliser then a winner was on the cards and I'd have it covered for peanuts.

Palace equalised on 83' before Swansea regained the lead on 88', landing another £20 profit.

This game ended up returning my biggest profit of the night, largely thanks to the in-play stats.

The agony of being a Bournemouth fan... though it's not all bad these days!

I danced in the street as the Cherries took a 2-0 first half lead! However, after many years of watching Bournemouth surrender leads against the likes of Darlington, Rochdale and Shrewsbury, I was nervous.

On 30' I layed Bournemouth in the half-time market at 1.02 which cost me just £1.07 in order to potentially bank £60 profit. There was every chance of Arsenal pulling a quick goal back and then I could have traded, but it was more of a speculative effort.

At half-time - and with a profit already locked in from the first halves at Stoke and Palace - I decided to cover some goals markets.

In my previous case study, I had layed the underdog and backed the favourite, but that was 0-1 with the favourite at home. On this occasion, I didn't necessarily expect Arsenal to win (I hoped they wouldn't!) but they had to go all out attack and would, perhaps, get hit on the break.

By laying U4.5 goals at 1.70 I would have an Arsenal comeback win covered, but also a 3-2/4-1 win for Bournemouth; it was much more flexible.

Incredibly, Bournemouth scored a third goal on 58' and Eddie Howe decided to shut up shop, abandoning the attacking play which had been working so well all night. A couple of defensive subs later and Arsenal pulled a goal back.

At this point, I decided to green up my U4.5 lay to guarantee a profit of £8.23. It more than covered my other lays and, at 3-1, Bournemouth were still two goals ahead and trying to kill the game.

It then went 3-2 but, rather than green up my U5.5 lay, I covered liability only and left all the profit on the overs. There were two reasons for this:

There are trading angles in most games, but the art of a trader is to find strong opportunities at the right prices.

At Stoke I fancied a home win, but I didn't simply back Stoke at 1.80 or so before the game. I waited for confirmation that they were playing as expected and found a much better price; better risk/reward.

If it had been 0-0 at half-time I still had the second half, but I wouldn't have rushed into anything. If Stoke had gone 1-0 up and I missed a trade, so be it. I don't go for that, "I was just going to back them, gutted I missed out" rubbish. If it was a strong enough trade, I'd have already been in it!

Palace were also odds-on to win, but there was no way on earth I'd have backed them at that price! I expected them to be fired up and win - as teams tend to do under a new manager - but this wasn't Allardyce's first game in charge. I didn't stick doggedly to my pre-match opinion, questioned myself after the in-play stats didn't support it and found a big priced opportunity.

If it had been 0-0 at half-time, I may have found something in the second half or perhaps not. One thing's for sure though... at odds of 7.00 I only need to hit a winner now and again for an overall profit. I know it's not even going to be near a 50% strike rate at that price!

The Bournemouth game was a case of taking advantage of strong favourites bouncing back. I was using profits already banked, so very little risk and I removed all of that by trading at 3-1. As a Bournemouth fan I wanted the game to end 3-0, but as a trader it was a very satisfying profit, albeit at small stakes.